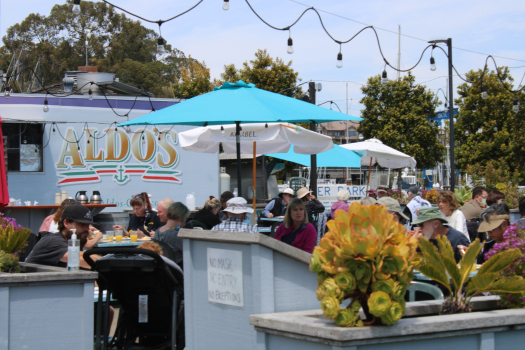 SANTA CRUZ – Aldo’s, a popular eatery in Santa Cruz for nearly 60 years, will not return to its old post atop the Santa Cruz Harbor seawall.

For nearly 4 1/2 years now, Aldo’s has been located on the Mariner Park Lawn while it awaited reconstruction of its new establishment. Now, that reconstruction will no longer happen.

It was an iconic beloved restaurant by the Santa Cruz community,” Santa Cruz Port Commission Chairman Toby Goddard said. “What’s not to love when you see the view of the water looking out past the Monterey Bay? It was, for me personally, a sad finale, even though you can still eat at Aldo’s on the lawn and that will go on for some time. The local neighborhood just loved that spot.”

The beloved restaurant was torn down in 2016, due to a need to reconstruct the seawall it was perched upon. The seawall was built in 1963, and was intended to only last 25 years, according to Mauro Olivieri, the owner of Aldo’s.

However, the retaining wall endured the elements for 53 years before the port commission chose to deconstruct and subsequently reconstruct it. The intention in the reconstruction was to build a new Aldo’s on the new seawall with a 40-year lease, but the financial burden for the new restaurant was placed on Olivieri.

“The port district, when we started the wall, very much wanted Aldo’s to return,” Goddard said. “That was signaled by the 40-year lease.”

As the world has learned during the last year, things don’t always go as planned. Olivieri and the port commission mutually agreed to terminate the lease agreement on Tuesday.

Life threw a few curveballs Olivieri’s way, which weakened his confidence in the contract. First, the COVID-19 pandemic caused financial issues for the restaurant, followed by a back surgery that made it harder for Olivieri to meet deadlines in the contract as he recovered. As the most recent deadline approached, he considered what was important to him, his family.

“With the COVID situation as it is, it just became a type of thing where I have to look into the mirror, ‘If something happens to you, look what happens to your wife,’” Olivieri said. “It broke my heart not to proceed, but I felt at that point it was the right decision for my family.”

The new seawall cost about $2.3 million in engineering and design, which was picked up by the port commission. The cost of the restaurant was a different story. The cost estimates for the rebuild were upward of $3 million.

Olivieri received funding based on an appraisal of the land but had to fight for a better appraisal. Originally, the land was valued at roughly $1.5 million, but through deliberation, Olivieri was able to raise that to $2.57 million.

Unfortunately for the restaurant owner, the port commission, and the lease agreement, the combination of the financial burden and the twists and turns of life caused for the cancellation of Aldo’s new home.

“Kudos to Mauro. He worked really hard,” Goddard said. “He worked hard to get the right people in place and assemble the financing. I think it was just tough. That’s to me why it was sad.”

While the restaurant won’t return to its former post, it will continue to serve the community and watch over sailors in the harbor. Olivieri said he wants to keep the restaurant running as long as there is someone to run it.

<STC-L-ALDOS-0501-02.jpg>Diners get a view of the sailboats that moor at the Santa Cruz harbor while on the Aldo’s patio on Friday. (Santa Cruz Sentinel — Ryan Stuart)
The family line continues long past him, as Olivieri now has four children and several grandchildren that are heirs to the diner’s legacy. In fact, the legacy, which includes a feature on Guy Fieri’s Diners Drive-Ins and Dives, has been within the Olivieri family for the last six decades.

Aldo’s was first established in 1963 by Olivieri and his father, Aldo, mother, Inez, and brother, Walter. Since then, the restaurant has grown into a hometown favorite, which Olivieri attributes to the family’s emphasis on good food and customer satisfaction.

“The key is the customer gets enough food and is more than satisfied and the price is fair. That’s what we hope to continue with,” Olivieri said. “The key to good food is very simple. You use the best products and that’s what we do.”

While the watch over the seawall remains vacant, it won’t be a permanent opening. The port commission will begin a search for a new restaurant to take Aldo’s place soon, according to Goddard.

“The port district wants to have a restaurant there for the community. It’s an awesome site with an incredible view and a ton of action,” Goddard said. “The timeline is tight because there are deadlines imposed on the port commission by the Coastal Commission. It’s not unlimited, and yet it’s too early in the process to lay out what’s going to happen.”